The High Uinta Wilderness and The Highline Trail is in northeastern Utah which runs from east to west for this mountain range. This trail is about 2 hours from Salt Lake City or 8 hours from Denver where I was coming from. This trail is above 10,000 feet for almost the majority and a lot of the time you’re around 11,000 feet. The trail is about 104ish miles with 16,700 feet of elevation change throughout the entire section. Most people skip the first 25 miles because of low water sources and I will say it is not the most scenic.

Now, getting from point A to point B solo took some research. My plan was to drive my car to Hayden pass at Highline Trailhead then take a shuttle to McKee Draw. The shuttle charges per car and unfortunately for me, the other two riders were stuck in an airport for a layover which means I had to cover the whole cost. This was unfortunate but with virtually no other way to get to the trailhead, this was my only option. I met a couple that hitch hiked and it took them the whole day, I also met somebody who flew into Vernal (airport by McKee Draw) and took a taxi up to the trailhead. I’m not sure how he was going to get back to Vernal or if he was going to hitch from Hayden Pass to SLC. The shuttle is the only real reliable way as a solo person to get to the trailhead.

The Good, the Bad, the Ugly and the missing pinky toe nails

“My feet are already wet and I feel…not excited” This was how I started my conversation about The Uinta. The day I drove into Hayden Pass it was a torrential downpour to the point I had to pull over my car on the highway cause I couldn’t see. On day one for the shuttle my feet got soaked just trying to get my stuff to the car. The drive took roughly 4 hours, my shuttle driver was rad (Amanda you rock!) I was hopeful the weather would turn the more west we went but alas it did not. I got dropped off in the rain and walked about 5 hours without it stopping. The terrain was very confusing, it kept saying I was on trail when there was not a visible trail. Half the time I was just walking over rocks and climbing over trees trying to find the trail. The picture below said I was on route, can you find it? Cause I sure can’t, this was a good chunk of the trail in the beginning and the end. 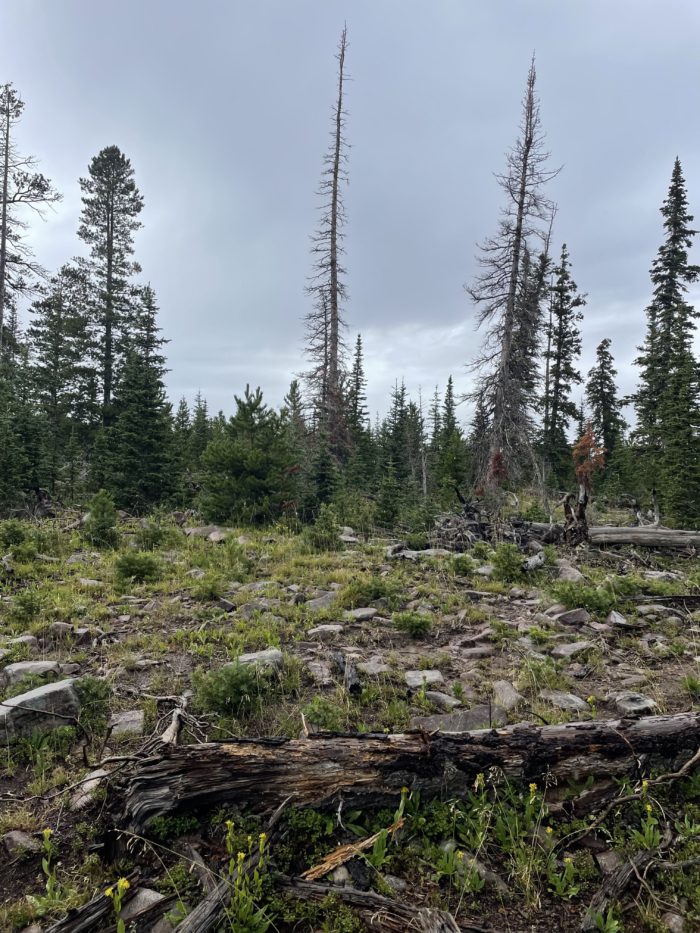 I was feeling like a badass solo female backpacker until about day three when everything went to hell. I noticed that morning that my pinky toes were bothering me a little bit but I couldn’t see anything visibly wrong with them until I pushed on the toe nail and realized both of them had blisters underneath. YIKES! Sounds more painful than what it was at the time. Then when I drained them (gross) I was hurtin’ pretty bad, I was dropping the F bomb when I hit a rock wrong. To top that off I also got more blisters on the sides of my feet and under them. Basically I was one big blister. Despite this my plan was to summit Kings Peak which is the highest mountain in Utah and a very small detour or so I thought. I landed up about 200 feet from the top (13,100) and bailed out due to how much bouldering/scrambling there was. I was the only one out there and my spidey senses were saying “danger, danger” when I kept landing on shifting rock and as much as I didn’t want to listen to my intuition I did, I feel like too often we don’t. Here is the view from coming down Kings Peak and the valley I camped in the night before. 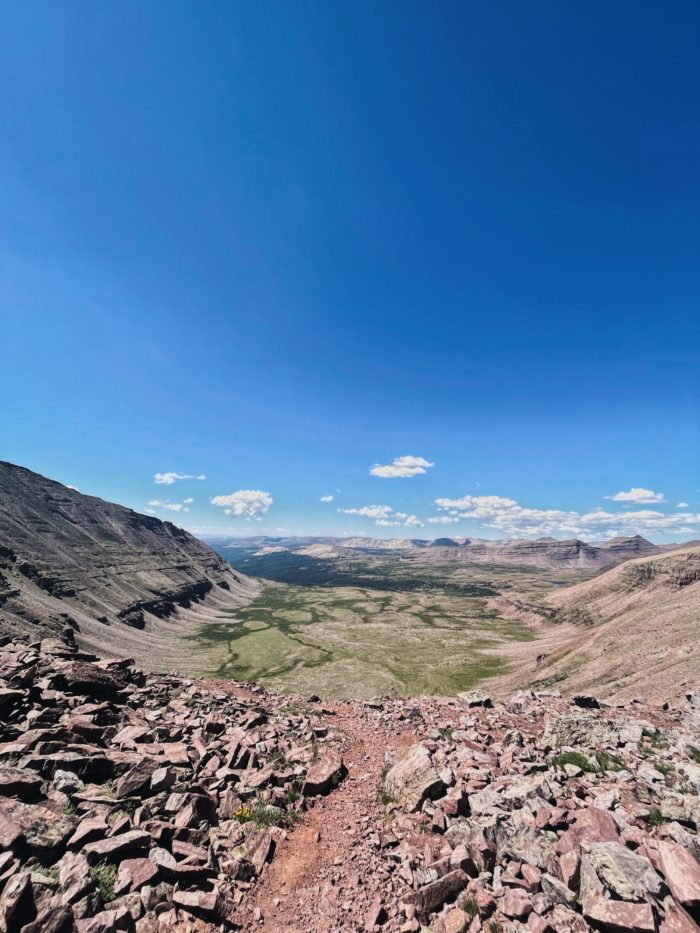 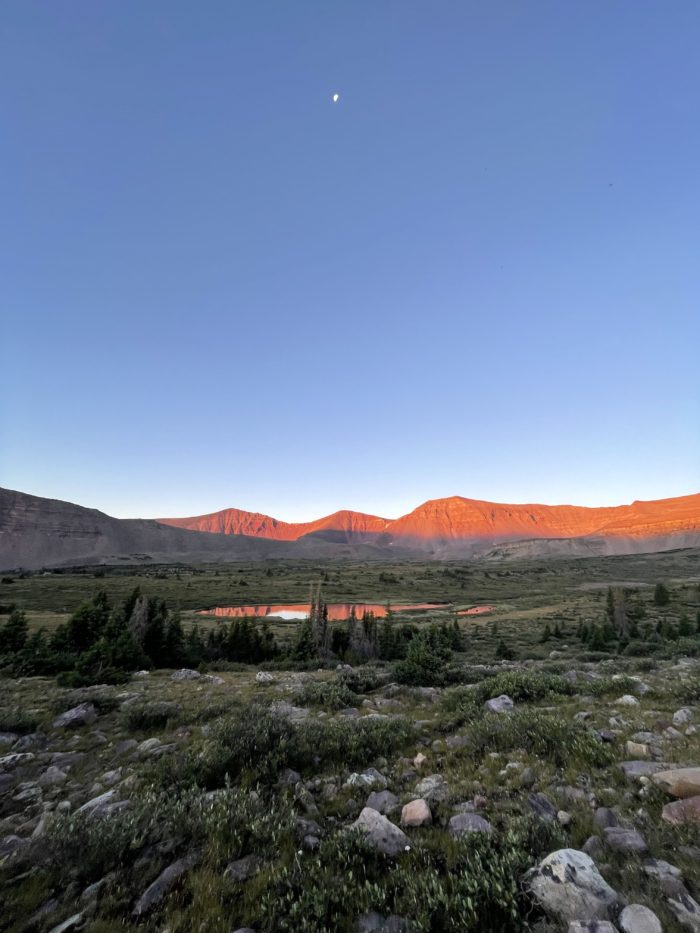 To make matters worse I started to feel intense sciatic pain to the point I was hobbling down the side of the mountain. I had dealt with this before I did The Colorado Trail and thought it was resolved….wrong! I still had about 6 miles until camp. As I came down the mountain I was in so much pain I was stopping every 15 minutes to stretch and at this point I was crying. I have never cried hiking or on trail before. My spirits were the lowest they had ever been. I started to question myself and my decisions, what made me think I could do this, I’m not even a real backpacker I haven’t done a crown, I’m an idiot for thinking I could do this, I’m weak, real backpackers don’t deal with this or feel so low about themselves. I was spiraling and fast. I wanted to curl up and cry in my tent which is exactly what I did.  Then it got me thinking what is a “real” backpacker”? Somebody who’s done every crown? Every trail? Is there even such a thing. Isn’t being out there embracing the suck, embracing nature, getting outside/inside your head the whole point of backpacking? I don’t think there is such a thing as “real”, although I tend to compare myself a lot.

Finally, I made it into camp, stretched and collapsed. I was praying that I would be able to walk the next day otherwise I would be calling search and rescue. Which was going to be hard cause I already missed the exit point for turning back and the next one was in 40 miles which made it seem like a helicopter rescue was in my near future. Luckily, the next day was much better I just had to take it slow and watch my feet placement really well so I didn’t twist a certain way. 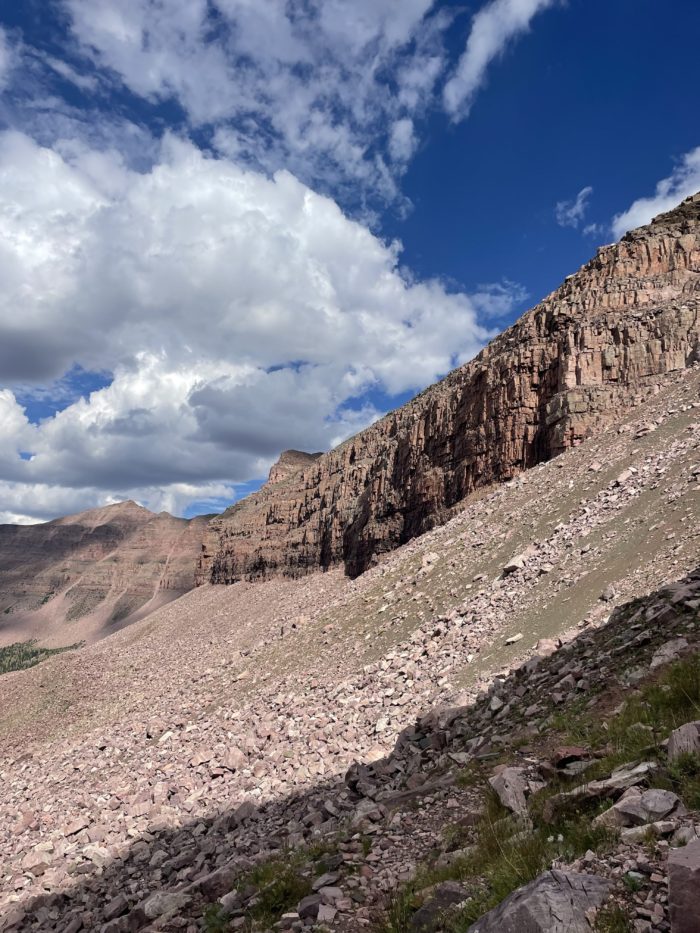 The Uintas are remote and for me lonely. In Colorado, most trails you see at least a few people every couple hours, in these mountains I ran into maybe 1 or 2 people a day. The last day I was losing the trail once again and I heard “Over here!” and ran into two other backpackers who had done the PCT the year prior. I was overjoyed to be hiking with people again and realized how much I had missed it over the last few days of being all by myself. Even if we weren’t talking just having that solidarity of knowing somebody is with you. I wasn’t expecting to feel as lonely as I did and was originally welcoming the solitude. Especially when I was at my lowest I just wanted somebody to make me laugh and give me their cheese. 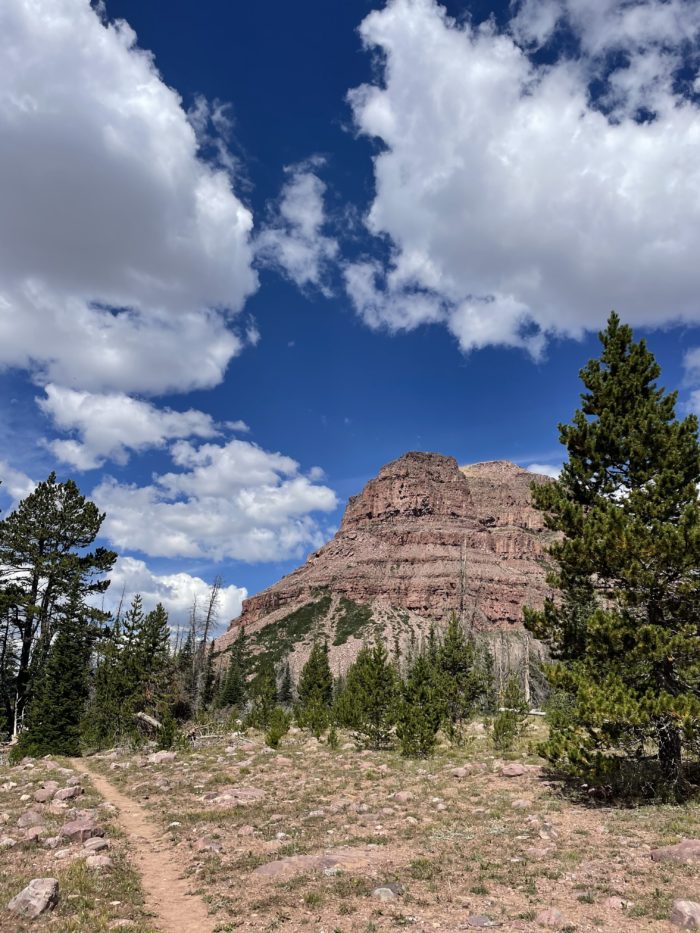 After 5.5 days The Highline trail was finished! Cost me a couple pinky toe nails, lots of tears, sweat, and pain but as always with backpacking worth every single view. Despite seriously questioning using my SOS button at one point, pushing through toe nails falling off and massive blisters I made it. This may not be a crown or a long hike, and I may not be a real backpacker but I’m trying to be proud of what I’ve accomplished. 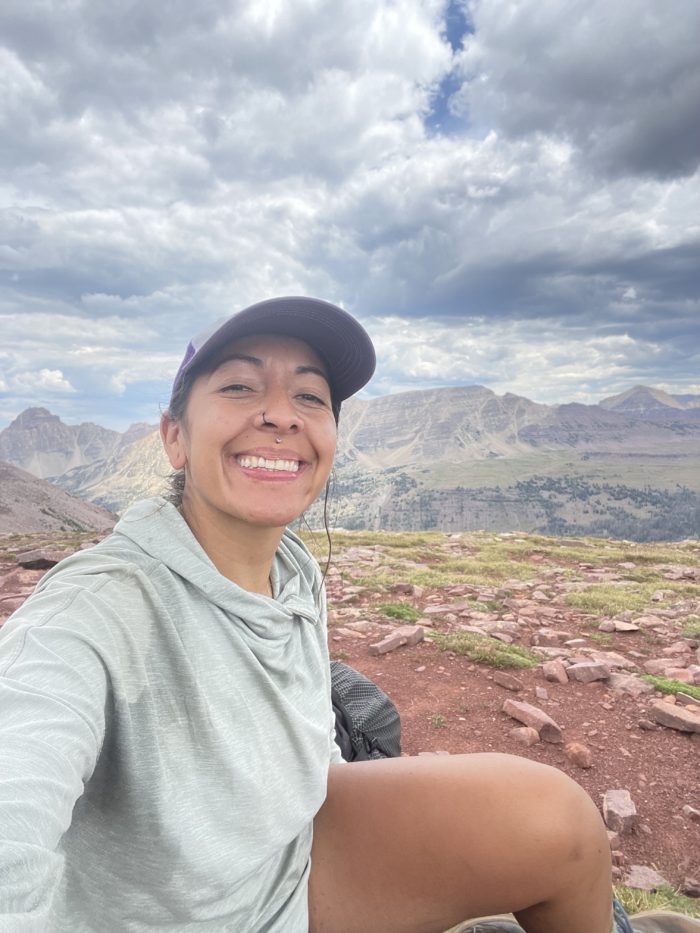 This website contains affiliate links, which means The Trek may receive a percentage of any product or service you purchase using the links in the articles or advertisements. The buyer pays the same price as they would otherwise, and your purchase helps to support The Trek’s ongoing goal to serve you quality backpacking advice and information. Thanks for your support!

To learn more, please visit the About This Site page.

3 Easy Hot Chocolate Recipes You Can Make on the Trail

“], “filter”: { “nextExceptions”: “img, blockquote, div”, “nextContainsExceptions”: “img, blockquote”} }”> Get full access to Outside Learn, our online education hub featuring in-depth fitness, nutrition, and adventure courses and more than 2,000 instructional videos when you sign up for Outside+ >”,”name”:”in-content-cta”,”type”:”link”}}”>Sign up for Outside+ today. Is there any better way to celebrate the holidays than […]

In today’s episode of Backpacker Radio presented by The Trek, we are joined by David “AWOL” Miller.  If you know anything about the AT, then that name is likely already familiar to you as AWOL is the author of not one but TWO of the most popular books related to the Trail, including Miller’s Memoir, […]

In today’s episode of Backpacker Radio presented by The Trek, we are joined by Nika “Early Bird” Meyers.  Nika is a backpacking badass.  Not only is she a triple crowner, but Early Bird has set a pair of speed records, including the unsupported FKT on the Long Trail and the self-supported FKT on the Colorado […]