July 17.  After a good break in the town of Lander, I started back on the CDT again this morning.  This next section of trail would pass through the Wind River Range, known as one of the most beautiful places on the CDT.

A couple gave me a ride back to the trail, on the way to their own day hike.  Back on trail, I started hiking over sage desert land, walking towards the Wind River Range.

I soon met two ranchers, cutting brush on their land by the trail.  They waved as I approached, gave me a cookie and told me to watch out for bears.

From this point northwards, I would be walking through grizzly bear country, where grizzlies are known to live and roam.  Hiking now required additional precautions: I carried bear spray at the ready and stored my food in odor proof and bear resistant sacks, away from my campsite at night.  Recommendations also included calling out “Hey Bear!” or other words loudly before hiking into any brushy area where a bear could be startled at close range.

All day I listened to audio books aloud, hoping that would help keep the bears away.  (I’ve read that the tinny noise of voices through a phone speaker isn’t as audible to bears, but it often felt easier to listen than to sustain constant vigilance at every turn.)

The day was spent mostly walking low dry foothill mountains, skirting the Wind River Range, with desert spanning out below and westward to the horizon.

Throughout the day, I saw 6 other hikers.  It was quite the crew, given that I’d typically see 0-2 hikers per day on trail.  I attributed it to the fact that a few of us had stayed in the town of Lander last night, and though we’d all made our way back to the trail at different times, we were all aiming to camp at a primitive campground 20ish miles ahead tonight, thus hiking with the same kind of goal and pace in mind.  It was refreshing to hike around a bend and see a hiker or two taking a snack break or resting, and sit with them for a while.

We all camped at the primitive campground ahead.  I was quite relieved not to be camping alone in grizzly country, even though I had been told that it wasn’t as common for grizzly bears to wander here in this area, as further up north.  Another hiker and I took much time separating out any items we carried with any hint of an odor, storing those things in our odor proof, bear proof sacks and tying them to trees away from the site.  We kept our tents free of nearly anything.

It was something to carry bear spray all the time, and keep up a constant alertness to the chance that a bear might appear.  I didn’t care for it, as I had found with most of the thrilling aspects of this hike.

July 18.  On this day, I hiked for several miles on the CDT, then turned off on an alternate path that takes hikers through the Cirque of the Towers, a particularly beautiful cluster of peaks in the Wind River Range.  The Cirque is a popular destination for hikers and climbers due to its stunning appearance: a bowl valley encircled by 15 granite peaks of over 12000 feet, the light grey of the granite and the blues of alpine lakes striking.  Apparently the Cirque was created by a glacier carving through the granite long ago.

As I neared the Cirque alternate, elevation increasing, I appreciated the increasing forest cover and shade, creeks, and a steady breeze.  The breezes were frequent and much appreciated over the next few days, as the mosquitoes were vicious when able to swarm unhindered by any gusts. 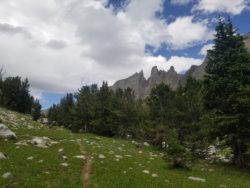 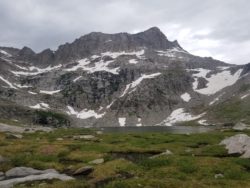 Mid-day I turned onto the Cirque alternate path with another hiker, our enthusiasm growing as we hiked through a pretty green valley lined with the steeply cut granite peaks.  The granite peaks were so unique in this area, raggedly toothed and sheerly cut to offered broad steep faces- I could see why climbers were drawn to these mountains.

Afternoon clouds and a brief rainstorm added to the beauty.  The grass and conifers were a bright healthy green.  Wildflowers were plentiful, adding yellows, purples, reds.

The area was unique, but some features also reminded me of so many other wonderlands: Yosemite, Goat Rocks Wilderness, the Sierra, the Marble Mountains Wilderness.  Many hikers I spoke with afterwards described the Wind River Range and Cirque of the Towers as their favorite part of the entire CDT, and I felt the same. 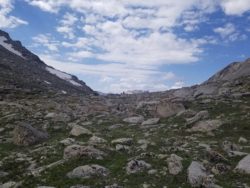 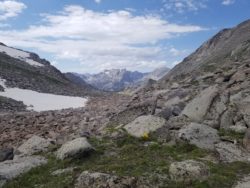 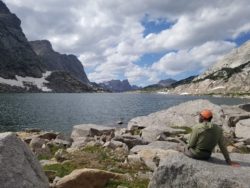 I stopped at one lake before completing the summit of a pass, admiring the way the waterfalls above made dark stripes on the granite, with fingers of green following the branching water.  The rushing sound of water falling everywhere added to the scene.  A hiker caught up and asked what I thought.  We started hiking, up the pass near Temple Peak, then down the other side to Temple Lake, the spires of the Cirque peaks ahead.

I continued on a trail by Deep Lake, walking over slabs of low angle granite, admiring the granite, the peaks above and the pretty creek outflow from the lake, which I followed down to another lake. 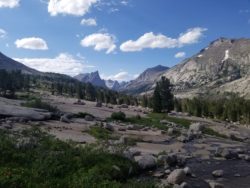 By evening I stopped at a site near Sandy Lake where some other thru hikers were camping.  It was nice to once again eat and camp with hikers, along a lake that reflected the towering peaks and evening light on its surface.

July 19.  I started packing up this morning in a swarm of mosquitoes.  I chose to eat breakfast inside the mesh of my tent.  Sometimes the cooler parts of the day offer a respite from mosquitoes, but the night had been mild enough that they were stirring and undeterred on this morning.  Irritating.

All the same, it was a pretty morning.  I followed the path up above our campsite and Big Sandy Lake.  The sun was lighting some edges of the mountains, while other edges or slopes remained yet in shadow.  It was a pretty contrast. 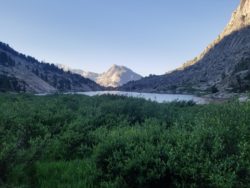 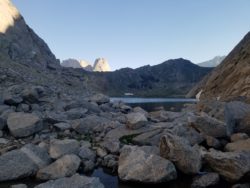 Wildflowers of the day included red Indian paintbrush, pink mountain heath, yellow Arnica and golden cinquefoil, bluebells, silky purple Phacelia, to name a few.  As always, it was remarkable to see fields of them in the foreground, with peaks in the background.

Beautiful views and a beautiful day, hiking up over passes and down along alpine lakes.   Part of the beauty came from being there for this season of the year- now far enough into summer that life was bursting and the days were truly warm.

At the top of one of the passes, I caught up to a group of three young men out section hiking for a week.  They were a neat group to talk with, friendly and curious about my thru hike so far.  They told me about seeing some climbers this morning, small pinpoints of headlamp light slowly ascending great granite faces in the darkness.

They asked how many miles I’d been hiking lately, then laughed about taking their time, spending hours at their campsite that morning eating and observing, jumping into alpine lakes multiple times a day.  They asked me what the social aspect of the CDT is like, and I mentioned how nice it had been the last couple of days to have more thru hikers around me, though I was thinking, “Mostly non-existent”.  Every day lately, I was leaning harder towards leaving this trail earlier than I’d imagined.

After hiking and eating a snack with this group, I continued hiking, spirits lifted after spending time with three peers who seemed curious, thoughtful, and laughed easily.

The afternoon brought me out of the Cirque area, and back onto the official CDT.  I often looked back at the pretty peaks behind, from over meadows of yellow wildflowers and winding creeks. 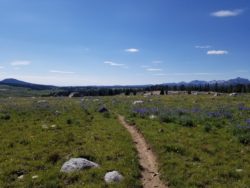 In the evening I camped with an older hiker who was fly fishing without a pole in Sandy Point Lake.  He said that if he caught a trout large enough, he’d share it with me for dinner.  Though I hate the taste of fish, I liked the idea of some extra protein.

As the sun set, the hiker pointed out the trout gulping insects, dozens of ripples dotting the lake surface.  I was amazed by the number of ripples, and how the trout started their surface gulping at that precise time of day.  I imagine there was a cycle and science to all this: the evening cool related to the behavior of the insects and the trout.  Though I didn’t know all the whys and hows in the scene, it was pretty to observe.

The next morning I would hike by hundreds if not thousands of mayflies, bodies glittering in streams of sunlight as they hovered up and down.  A circle of life in this niche I only know a bit about- clean water, trout, mayflies.  It was neat to see so many mayflies in this pristine wilderness, and know that what I was seeing was only a small peek into all the life thriving here. 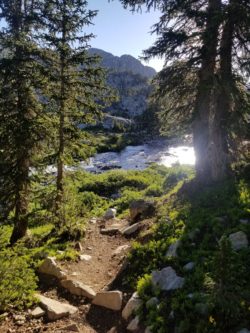 The specks of light between the conifers are mayflies. 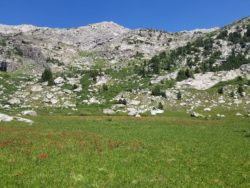 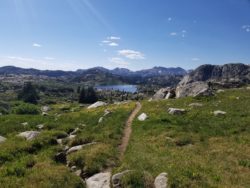 I found the Cirque of the Towers, within the Wind River Range of Wyoming, the most beautiful of all the places I hiked through on the CDT.  I was glad to have seen it, glad it had been a part of my time out on the CDT, especially as I considered bringing my hike to a close in days near at hand.

In today’s episode of Backpacker Radio presented by The Trek, the nepotism continues as I’m joined by my 2011 AT pal (drink), Melissa “Click” Goodwin.  In addition to an extensive backpacking resume, Melissa is a professional photographer and the founder at Girl Gotta Hike, a guiding company for women based out of New York.  We […]

Dr. Bronner’s Says Hikers Can Use Their Soap for Anything. I Tried it.

“], “filter”: { “nextExceptions”: “img, blockquote, div”, “nextContainsExceptions”: “img, blockquote”} }”> Get full access to Outside Learn, our online education hub featuring in-depth fitness, nutrition, and adventure courses and more than 2,000 instructional videos when you sign up for Outside+ >”,”name”:”in-content-cta”,”type”:”link”}}”>Sign up for Outside+ today. For years, backpackers have been bringing their trusty multitools into […]

The 6 Most Popular Backpacker Essays of 2022

“], “filter”: { “nextExceptions”: “img, blockquote, div”, “nextContainsExceptions”: “img, blockquote”} }”> Get full access to Outside Learn, our online education hub featuring in-depth fitness, nutrition, and adventure courses and more than 2,000 instructional videos when you sign up for Outside+ >”,”name”:”in-content-cta”,”type”:”link”}}”>Sign up for Outside+ today. From FKT chasers to meditative solo hikers, there are as […]